In the middle of reading Amy Kelly’s vibrant biography of Eleanor of Aquitaine, I came across Pierre Abelard.  When Kelly wrote that his students “drank his poison” and fueled “the new Gothic spirit of inquiry”, I temporarily interrupted Eleanor and rabbit-trailed into one of the most progressive thinkers/philosophers of 12th century Paris.  In so doing, I discovered a legendary love story.  Heloise and Abelard.  Illicit love, a baby named after a scientific instrument (Baby Astrolabe, anyone?), secret marriage made public, and castration(?!?).

Abelard was forced to burn his interpretation of the trinity and lived as a hermit until his followers found him. The Oratory of the Paraclete was born. But fearing further persecution, he left and gave Heloise residence at the Oratory when she and her nuns were expelled from their convent in Argenteuil. Then their letters begin. Soul-wrenching unhappiness interspersed with passion spent but far from ended, remembered, questioned, beckoned, Heloise quarantined according to Pierre’s wishes for her safety.

When he died, his bones were secretly taken to the Paraclete and left under the care of Heloise whose own bones came to rest beside Abelard’s. Their bones were moved several times and are now disputably lying in a tomb at Père Lachaise Cemetery in Paris.

A history of dichotomies, for although Heloise loved Pierre, she only married him to appease her uncle, who had him castrated. What, what? 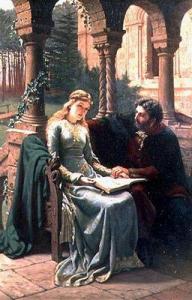